The final assignment for my class was to create a book using the provided text. The purpose of this book is to be a high-quality "museum" piece, which serves as tribute to the musician or band that is the subject of the text.

This assignment spanned five weeks, and had a different stage for each of those.

For week 1, the goal was to figure out what the most important spread in the book would be. It had to be something that sets the "DNA" of the entire book. It would need to have enough hierarchical elements, and be something that is emotional and tells a story.

I know this sort of sounds like crazy speak, but it is hard to describe the requirements in a more precise way. Figuring this out requires a lot of experimentation.

This chosen spread would need to be designed in 3 different ways, and it should contain the longest titles or lines in it so that the style it sets would be flexible enough to apply throughout the rest of the book.

Another goal for the first week was to figure out (or at least start figuring out) the creative driver. A creative driver is a short phrase (usually no longer than 3 words) that concisely and accurately describes the essence of the project, allowing to set the direction and to tell a deeper story. An example of a creative driver would be "neighborhood coffee pub" — you know right away what to imagine when you hear it.

The text I picked was about the Beatles, and specifically about Sgt. Pepper's Lonely Hearts Club Band album. I researched information about the band and the album, and listened to each of the songs carefully, looking for inspiration. I didn't know what my creative driver would be until almost a week later, but I had an idea of what to do for the images. The book was supposed to have at least 10–15 images, and I wanted all of those to be something unique, something that I created myself.

I remembered that many years ago, I came across this cool program that generated beautiful randomized fractals. I could not quite remember its name, and searching for it on the Internet didn't work: I found a lot of mediocre programs that generated rather ugly fractals, but nothing like the ones I had in mind.

I ended up digging out my old Windows laptop (glad to know it still works!) and going through my back up hard drives. This was one of those rare times I did not feel bad about almost never deleting anything. I found the program, and it even had a newer version available! So I generated a fractal (it takes about 20 minutes to render on my laptop, so one was enough to get started), and created a very simple spread. 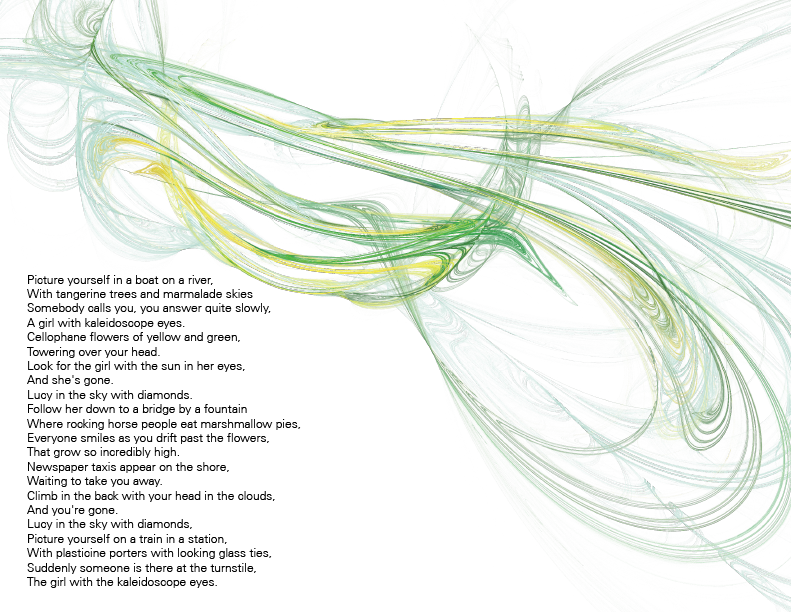 Of course, this was still way far from the final book, but at least I had something!

I decided that the most important type of spread in the book would be one that contains a song, but I didn't figure out how I would treat the titles and such. Surprisingly, just working out what I wanted to do in general was much harder for this project than for the previous ones.

During the critique in class, the group agreed that fractals could be an interesting choice for images, but of course I still needed to do a lot of work.

Come back in a week for the next part :)