I went on a trip to California last year and ended up renting a car. They didn't give me much choice over which car I would have (barring the unreasonably priced options), so I ended up with a 2013 Ford Focus.

I have never driven one before, so I had to figure a lot of things out.

I got in the car and realized that I won't be able to drive without moving the seat forward, since I could not reach the pedals. I tried fumbling around the usual places where seat-adjusting mechanisms would be, but could not find which knob moved the seat. Time to pull out the shiny manual! 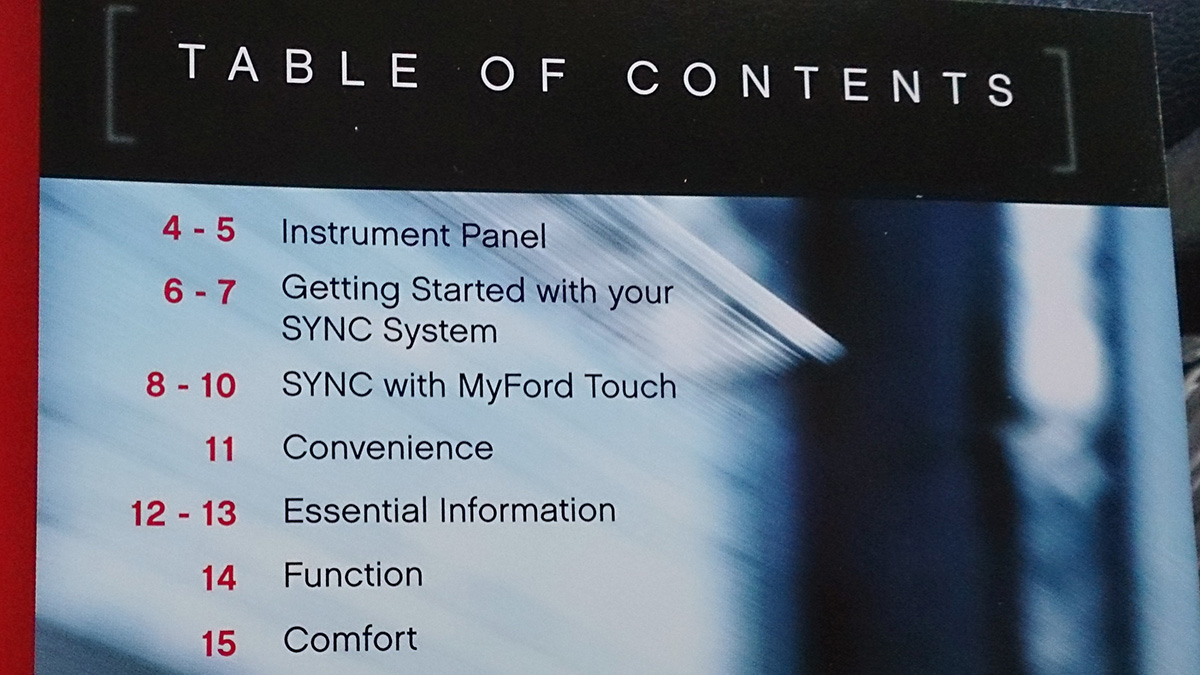 The table of contents had me completely stumped. Should I look under Convenience or Comfort for instructions on adjusting the seat? Turns out, seat adjustment is under Comfort. 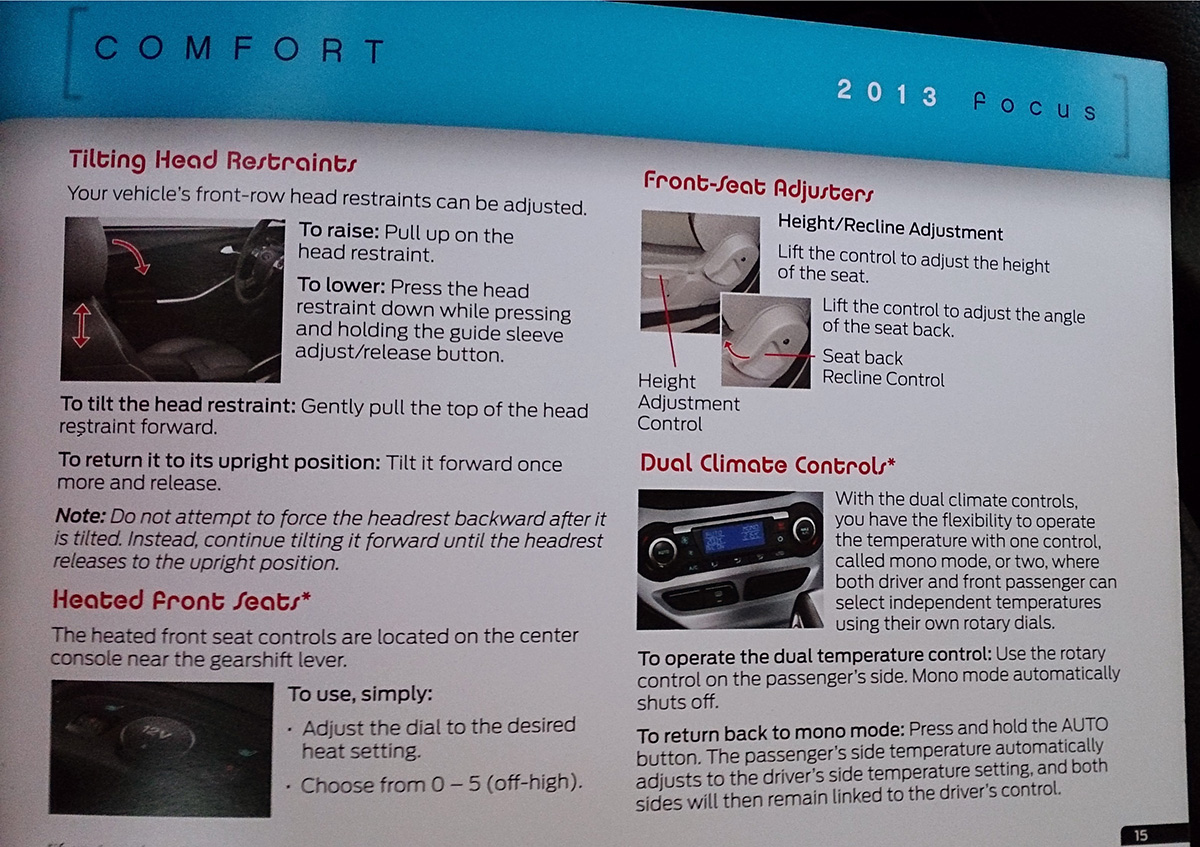 Now, if you look at the "Front-seat adjusters" section on the top right, you'll see a whole bunch of issues. Being me, I cannot pass up on the opportunity to say that the typeface choice is horrible. First of all, it doesn't even say where those adjusters are. For all I know, they could be on the car roof, and there is no way to tell from the picture. Then, more importantly, it doesn't even mention how to move the seat! It only tells you how to adjust the height and the seat back angle.

Of course, I knew that the seat must move, so I tried pulling and pushing on those controls some more, and in the end, I managed to get the seat to where I wanted it to be.

Comparison point: In Honda CR-Z, which I drove at home, there is a metal bar under the front of the seat that moves it. I found that it was much easier to use, since its functionality is more intuitive than that of one Focus' three knobs (and you can only figure out which one it is by touch).

Challenge #2: Putting the car into Drive.

No, seriously. I know what you are thinking as you read this — how could that possibly be a problem? 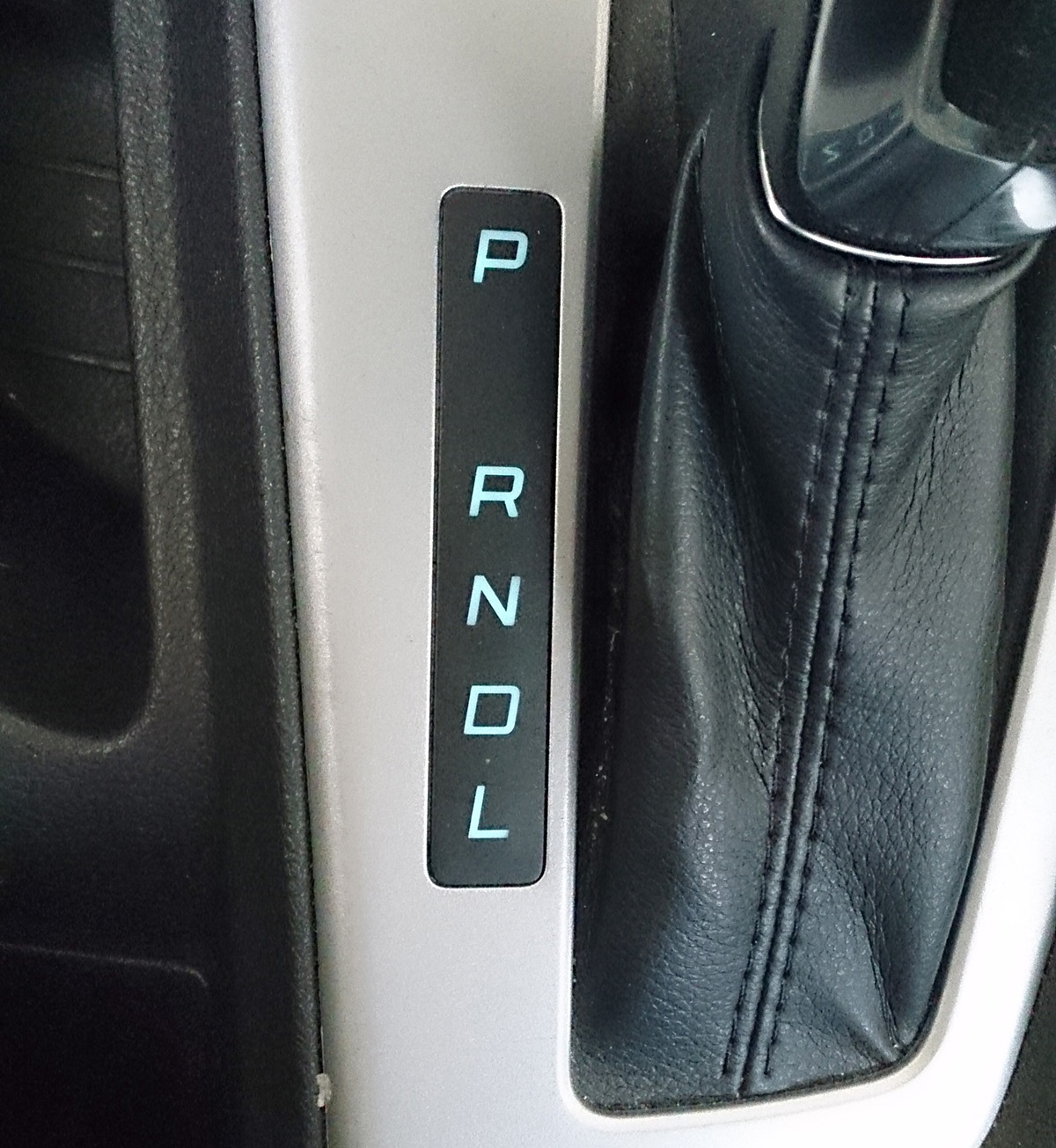 Check out this handy picture of the gear selector.

Now imagine that you are at a car rental place, and you need to first reverse out of the spot, and then start driving. So you move the selector to R, do the reversing, and then move it to... Well, ideally, you move it to D, but since it is not the last position, it is very easy to either overshoot to L, or get stuck on N, unless you are looking.

Even after two weeks of driving this car every day, I would still occasionally not get it into Drive on the first attempt.

Comparison point: The CR-Z does not have L on the selector. Instead, it has paddles on the sides of the steering wheel that can be used to achieve the same effect. This makes putting the car into Drive much easier, since you just need to move the selector all the way to the end.

One would imagine that with all the fancy new technology, a car made in 2013 would have simple temperature controls. 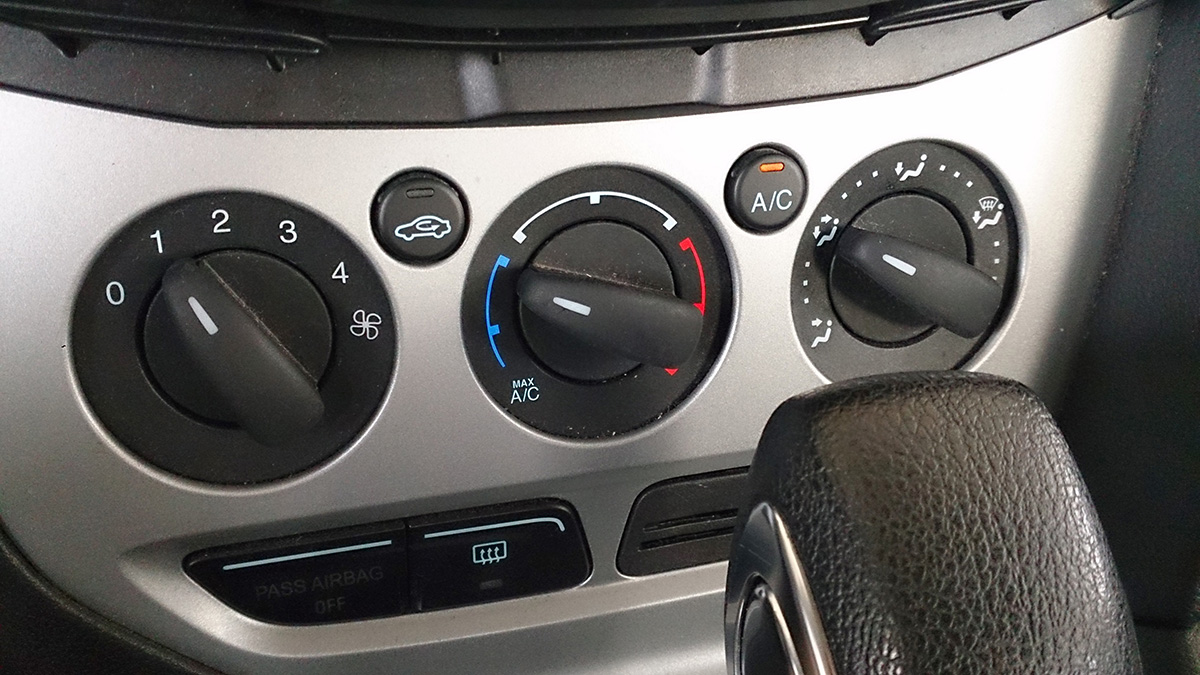 While this probably looks familiar, is this set of controls convenient and easy to use? The short answer is no.

When you get into the car in the morning, and it spent the whole night outside, it feels cold. Naturally, you would turn the heat on, and probably set the fan on high so that the car would warm up sooner.

I don't know of any research on this, but I suspect people spend way more time than necessary fiddling with the temperature controls because they have to be adjusted all the time to keep the temperature more or less constant.

Comparison point: In the CR-Z, you just set the temperature, and it figures out everything else. If the car it cold, it blows warm air. If the car is hot, it blows cold air. Mind you, it is not a fancy or expensive car — it is about at the same price point as the Focus. I doubt the price of the components for temperature control is very different either, so it's hard for me to see any reason why Ford would not use fewer knobs and make people's lives easier.

You will probably laugh, but it took me almost a week of driving to figure out how to tune to a particular station and save it in the presets. 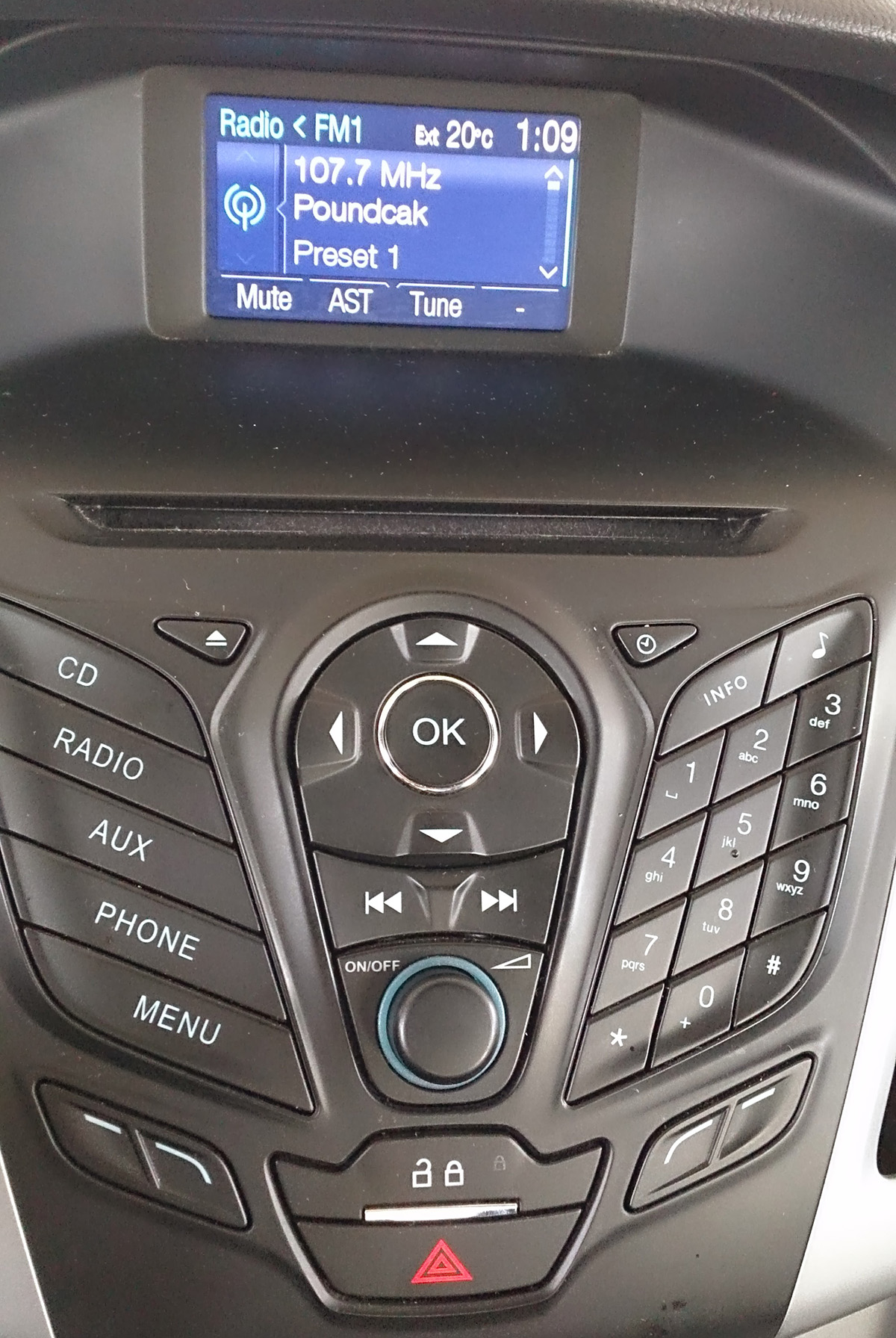 Just look at all these buttons!

I spent a lot of time going through the menus and trying to figure out how to save the preset for my favorite station. There was absolutely nothing that looked even remotely like that. Since there were other saved stations, there had to be a way, but it was by no means obvious. In the end, I long-pressed one of those numeric keys, and that saved my station.

This should not be so hard. There is no need to have 33 buttons and a knob in addition to a screen, especially when some of the functionality can only be accessed by using the buttons. The whole panel is just ridiculously complicated. I wonder how many people actually know how to use at least half of the functions that it offers.

Comparison point: On the CR-Z, you also have to hold down a button to save the station. However, there is no on-screen menu, so there isn't much choice in what can possibly be done.

I will have to admit that this was the one thing that I never quite figured out. What is the point of a trip timer that keeps counting as you stare at it while the car is parked? 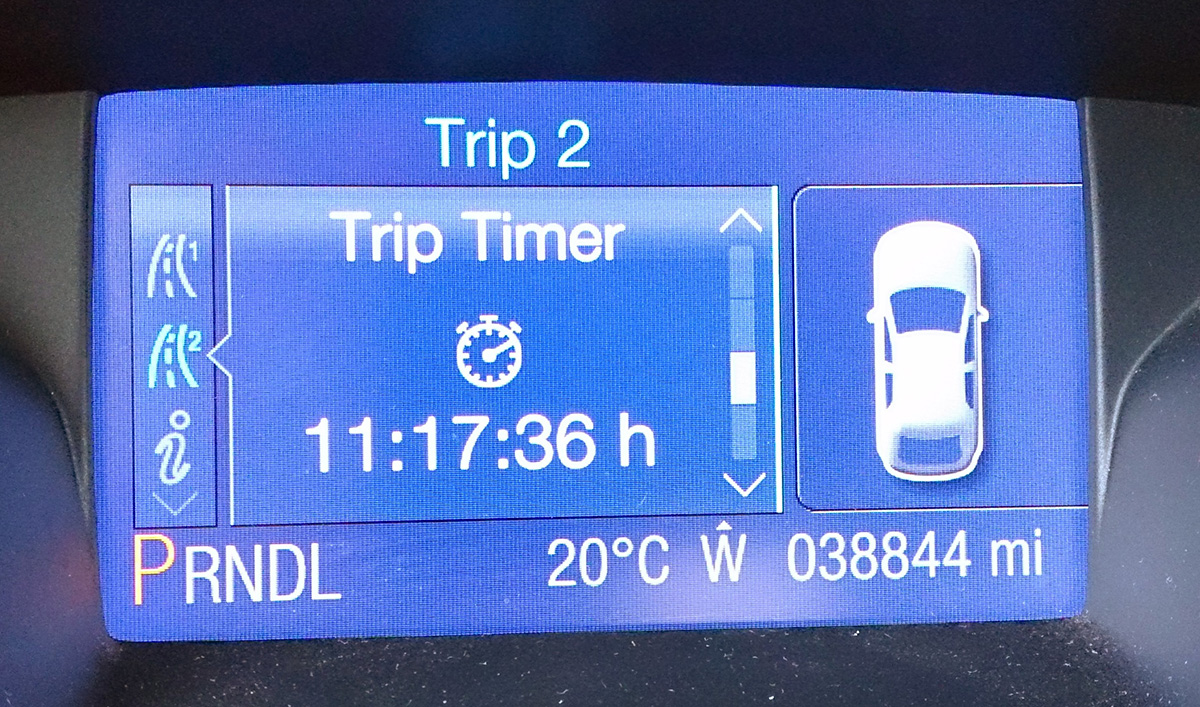 As you can see, my Trip 2 apparently took over 11 hours. I could not really figure out what was counted towards it, and what was not. I got to this screen after several days of driving for a couple hours every day, and I cannot see how this information is useful.

Comparison point: In the CR-Z, the timer resets every time the engine is stopped. It may not be the most convenient way of handling things for measuring long road trips, but at least it is a simple behavior.

When I got this rental car, I wanted to try it out with an open mind. I've been comparing this Focus to my CR-Z since that is a car I am familiar with, and it is not perfect either. What I found is that many of the problems that Focus has have already been solved by other car manufacturers, so I think there is no excuse for such a poor user experience. It just felt like whoever designed the car did not love it enough.