Last week I went to TypeCon (which is a typographic conference). It was conveniently held in Seattle, so I didn't have to travel far or pay an exorbitant amount for a hotel room. I first heard about this conference last year, when I signed up to take a workshop on Cyrillic typefaces in Denver, but didn't attend any of the conference itself.

This year, I took a two-day workshop with John Downer and Paul Herrera on brush lettering. Afterwards, I registered to attend the conference itself, which lasted for another three days.

If I had to list the one thing I had learned from the workshop, it is that brush lettering is extremely hard, and I cannot even pretend that I know anything about it.

Here is a piece that John Downer did in about 15 minutes (including drawing the lines and mixing the paint): 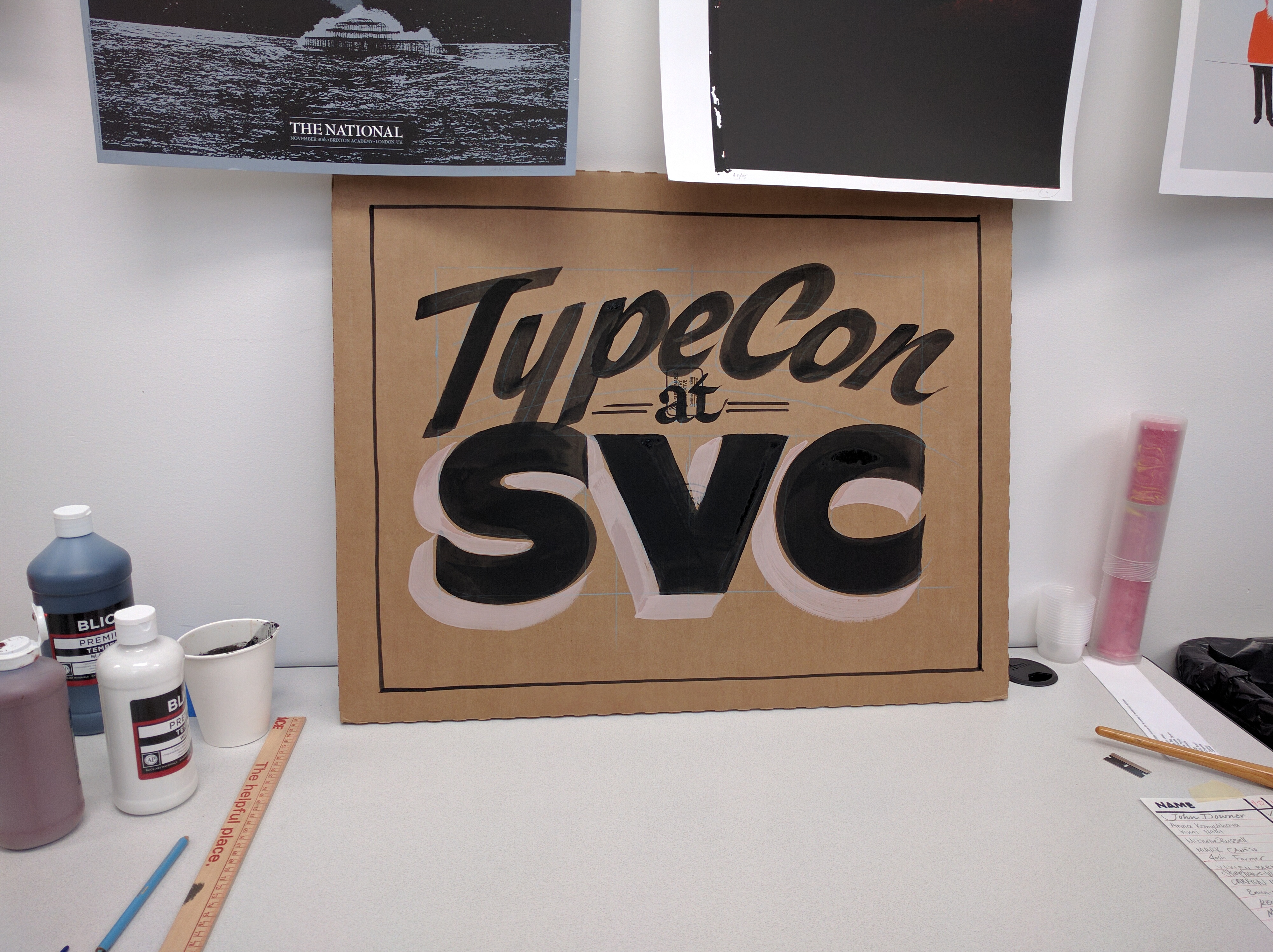 And here is what I ended up with at the end of the first day (for the sans-serif alphabet): 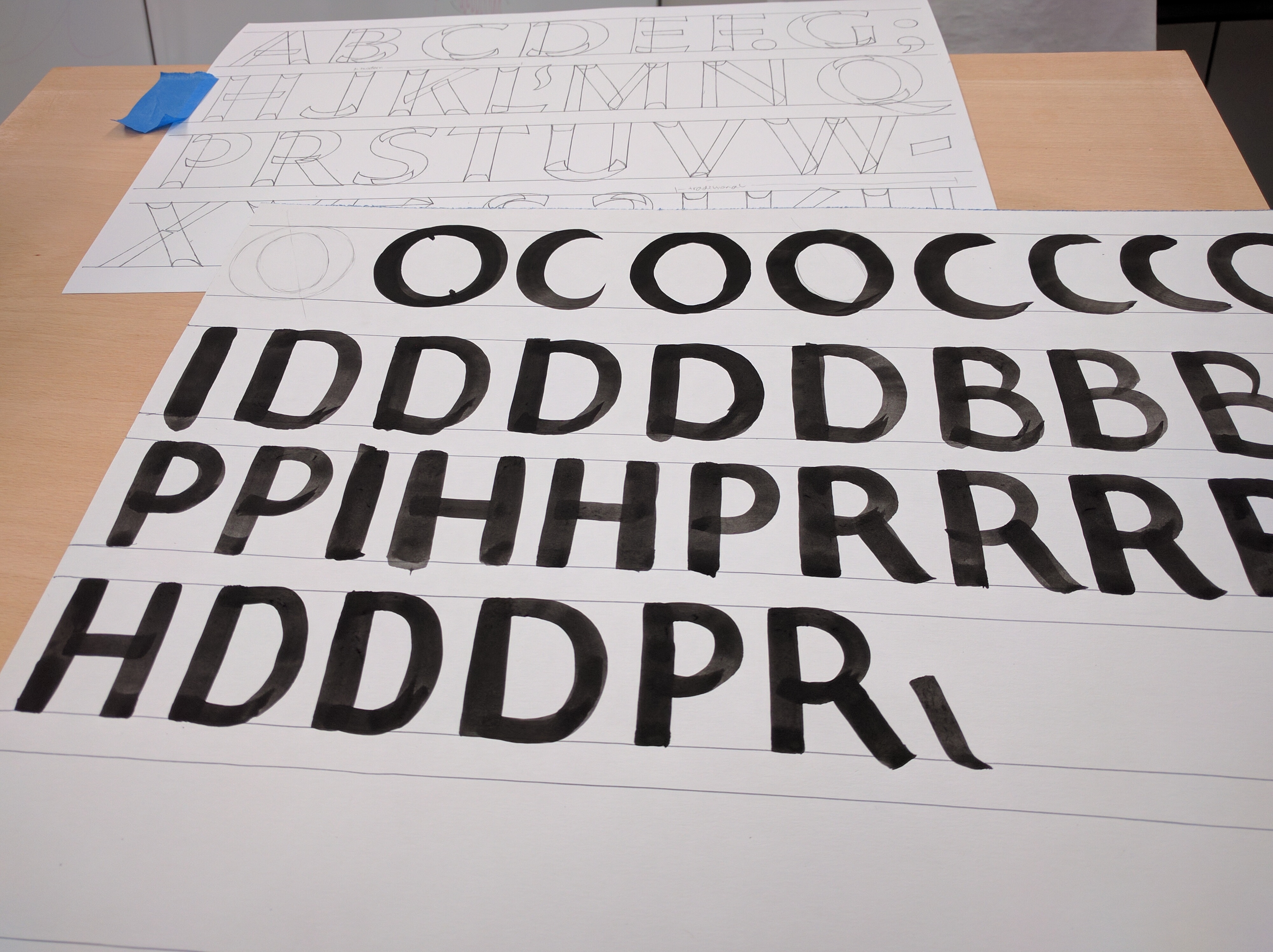 I think it is pretty evident that I still have a long-long way to go here. Things got a little better on the second day, when we did a different alphabet: 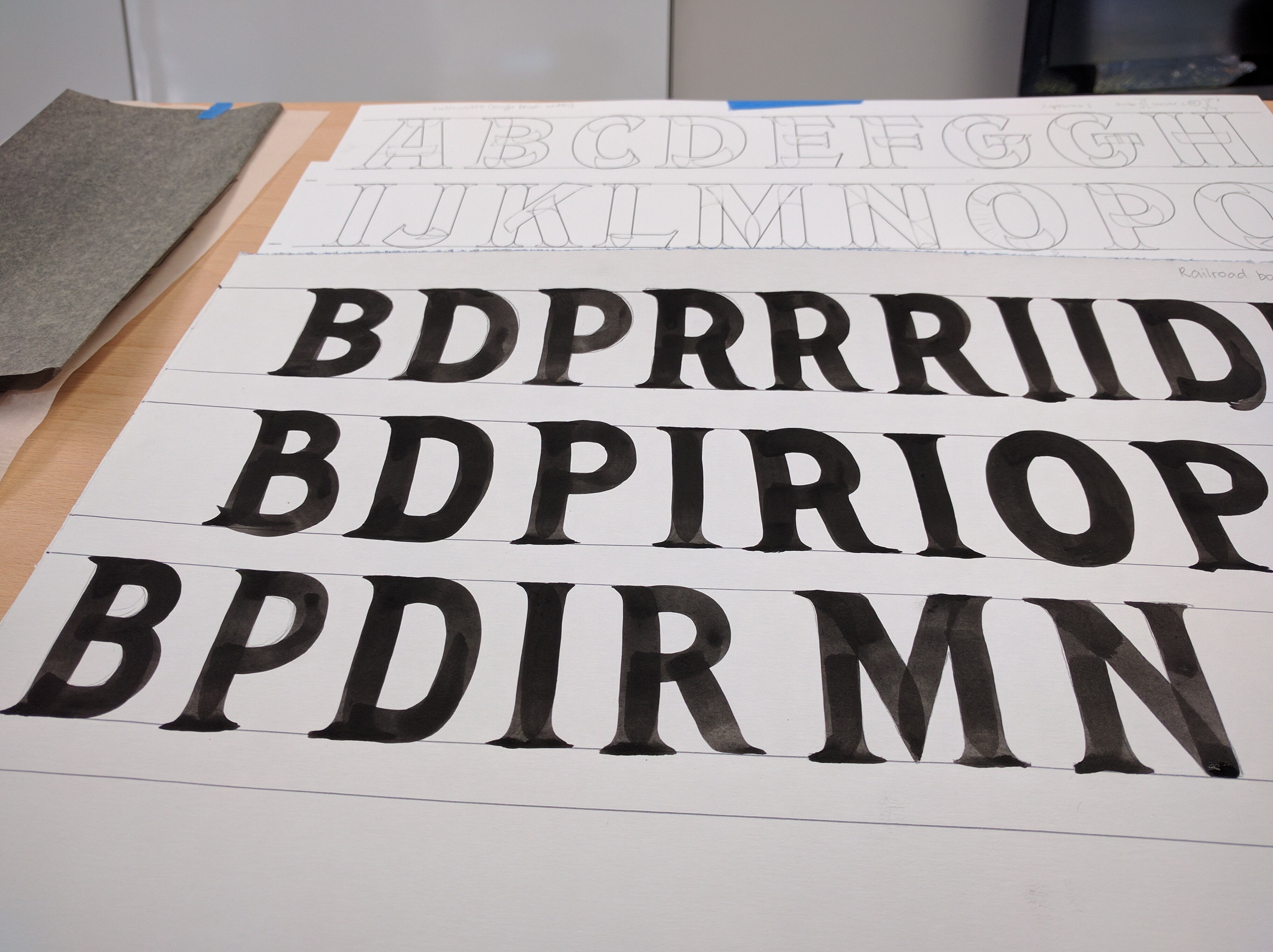 On the first day, I could not put enough pressure on the brush to make the thick lines thick. On the second day, I kept having the opposite problem: my lines were too fat.

The most mind-blowing part of this experience was twisting the brush. When you write with a traditional broad-edge pen, you always keep a constant angle throughout the stroke. With a chisel-shaped brush, you do exactly the opposite. In order to make the letter O, you need to twist the brush by 180° in each of the two strokes! That definitely takes some getting used to.

Another (infuriating) thing is how the bottoms of the letters turn out. When the instructors do it, of course they get everything square and perfect. When I tried doing the same, I ended up with ugly blotches most of the time. I got a bit better at it towards the end, but I can see that I need many hours of practice to really nail it down.

There is something refreshing about trying a writing style that I am not good at, but I almost wish I had a basic workshop first. At the beginning, I didn't even know how to hold the brush correctly!

The workshop was held on Wednesday and Thursday, and the conference itself started on Friday. This is only the third conference I've been to in my life, and I'm not sure what I was expecting. I think somewhere deep inside I was hoping that it would be similar to the International Calligraphy Conference earlier this summer. It was not. Aside from the workshops, the conference was pretty much held in a large auditorium and consisted of listening to various speakers. The talks were 20–40 minutes long. I enjoyed some of them, but there were also several interesting topics that were completely ruined by the lack of presentation skills. It would have been nice if the speakers had a short workshop on how to present effectively, or something like that.

I sat through all of the presentations on the first day, but by the end of it, I wasn't sure if I wanted to come back for day two. It almost felt like the talks were not worth my time. Of course, the reason why most people come to these conferences is networking, and I did talk to a couple people. However, the atmosphere was not nearly as open as it was at the calligraphy conference. People generally avoided making eye contact, and weren't willing to strike a conversation with a complete stranger.

This was probably because there was no prior connection between the attendees other than the workshops. I could simply chat with people from my workshop, but not so much with others.

I ended up not going to the rest of the conference, in part because I learned that my English teacher, Valery Solovov, had died. He was only 64. When something like that happens, it certainly puts things in perspective. Life is short, time is precious.

Now is a good time for me to look at my long-term goals and evaluate whether what I do brings me closer to them. I still want to do calligraphy and lettering, but I know I need to figure out a better and more consistent routine. I am going to take the next three months to work on that, which means I won't be writing any posts or sharing any of my work in that time.

I will be back with a post on December 1. Let's see where my little sabbatical takes me.