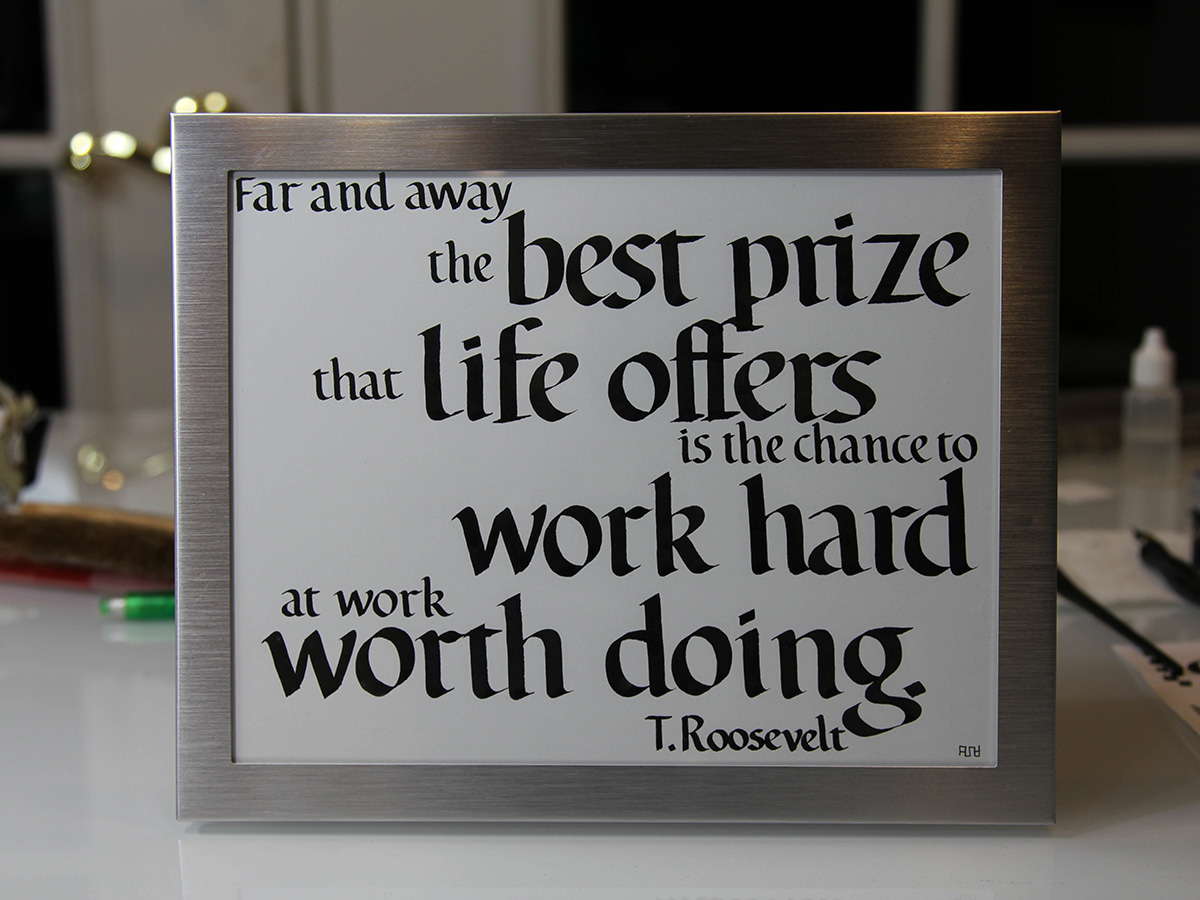 This is a project that I have been working on since 2012. I finally finished it a couple weeks ago, and as I was nearing the completion, I thought: how long should I work on my projects? Sometimes, I want to take some extra time to make it even better, but when does that extra time turn into extra pointless fiddling?

The first question that I ask myself is — was this project really worth it? Does it reflect 3 years of work?

Of course, I did not work on it every day for 3 years straight, so there is no way it would reflect that much work. However, I cannot say that completing this project was worthless. Even though it took a long time, I still had fun with it.

I know it's not perfect, and I probably could have done a better job, but I decided I will just do a better job on my next project instead of carrying long-standing debt around.

As I said, I started this project back in 2012, when I was still in college. A friend of mine asked me to write this quote, so I happily set to work.

First thing first, I wanted to choose an appropriate hand, so I did a quick test with sans-serif and serif romans, and italic.

I ended up settling on the serif version, and went off to create the layout. Mind you, I wasn't settling for any old simple layout — I wanted it to be really cool.
I don't have the original sketches anymore, but I ended up picking a skinny vertical layout that sort of justified (I was really into those parallel edges). I tried playing around with it, but no matter what I did, I still ended up with some pretty nasty "rivers" (whitespace that seems to flow down the page because the spaces on consecutive lines line up too well). 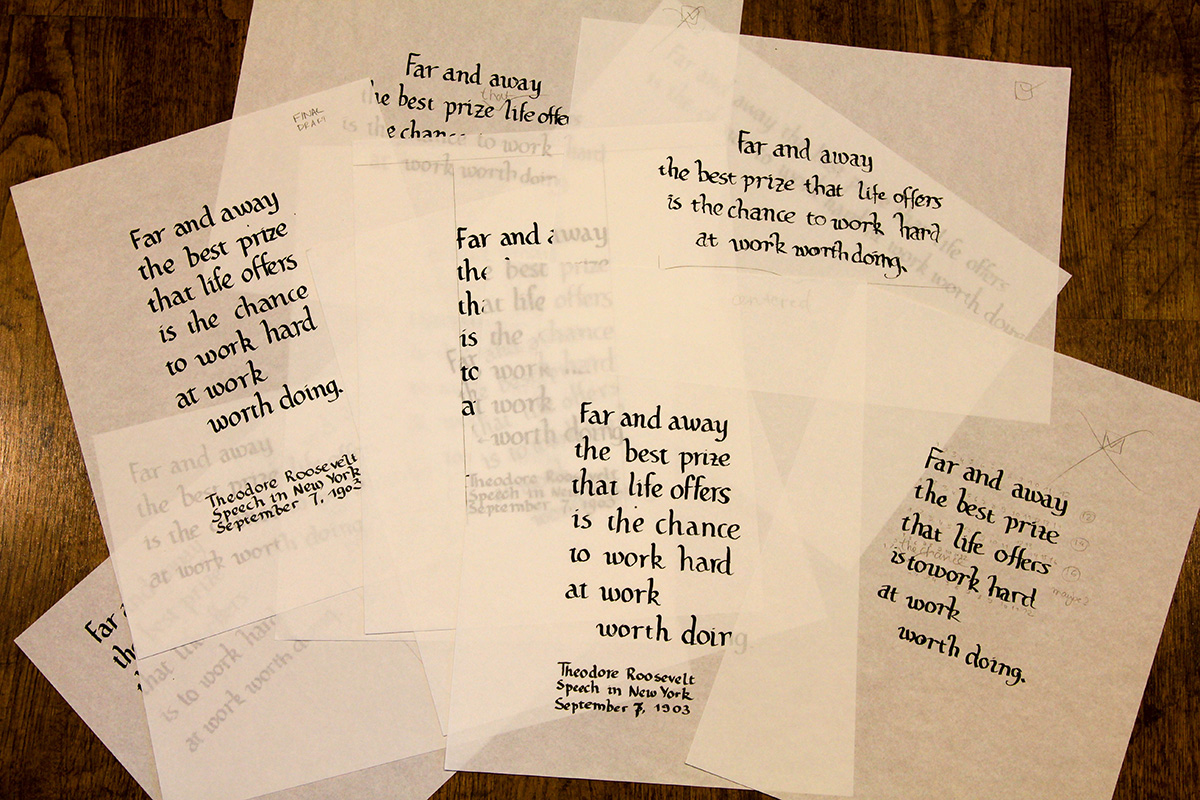 To be quite frank, looking back at this, I am not particularly impressed with how I decided to only put three words or fewer on each line. I went to my calligraphy teacher and showed her this idea, and she wasn't impressed either. She suggested that I do something more conventional.

I tried the good old centered layout with four lines of text. You can see them at the top of the image above. Needless to say, I was not particularly inspired by it, and the whole project kind of fizzled.

Fast-forward to 2015: I woke up one morning, and realized that this abandoned project was really nagging me. I had promised my friend that I would do it, but never did, and I like keeping my promises.

In the meantime, I had moved twice, so I went digging through boxes of old untouched stuff until I found my old sketches. I dusted them off, sighed, and started over. 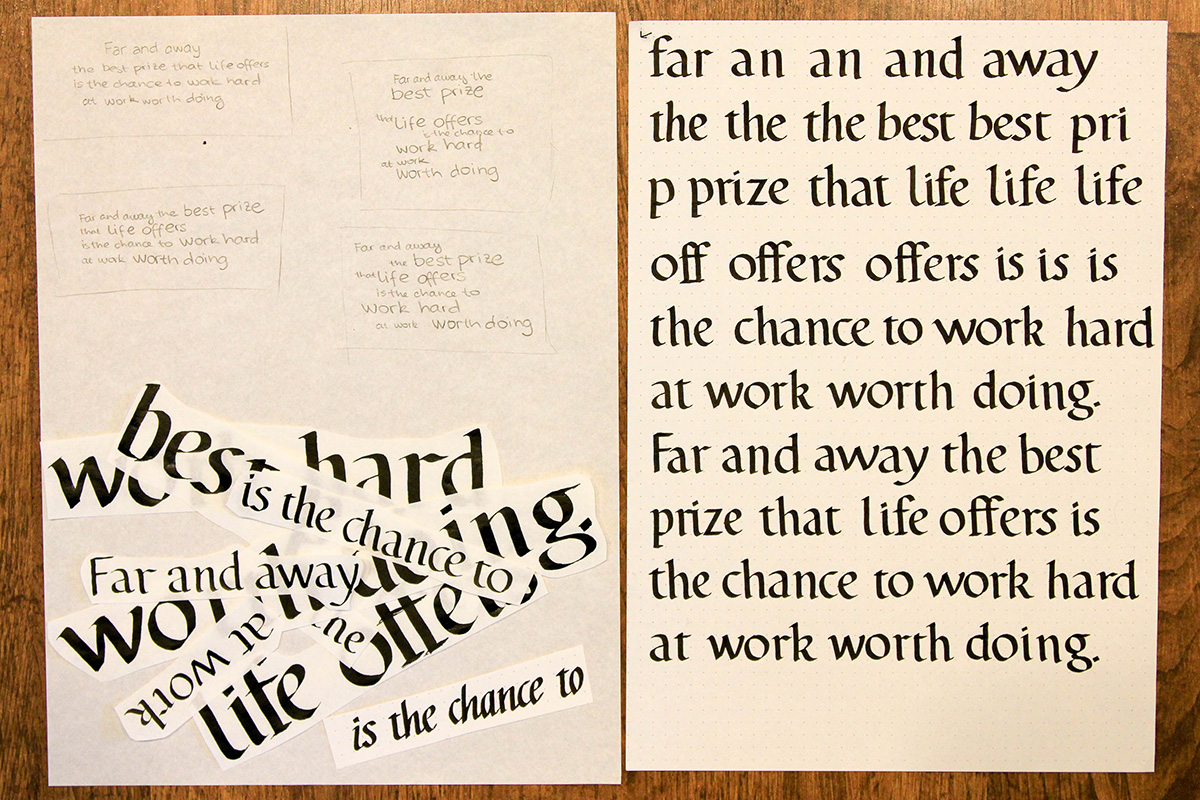 It took quite a bit of writing the words, cutting the paper up, and moving it around. I even tried using italic for a moment (a very short moment, at that). 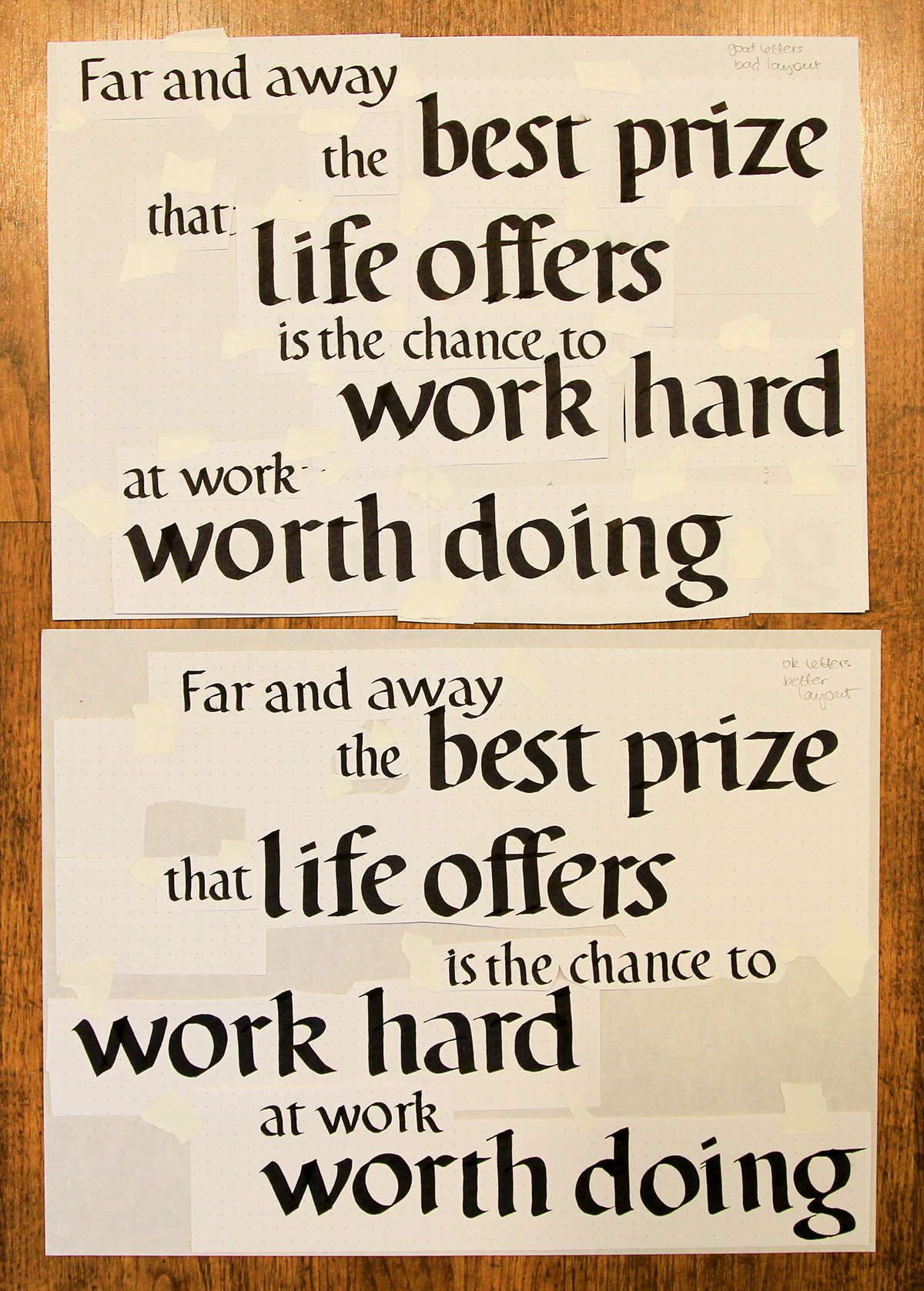 Fairly soon I knew what I wanted to do — I wanted to use two different sizes so that I could create a more dynamic layout. I even decided on which words were going to be which size.

After that, I hit a nice big wall for a month or so, arranging them this way and that, testing the different layouts on my friends (my favorite response was "Are they different?"), and generally wasting time. 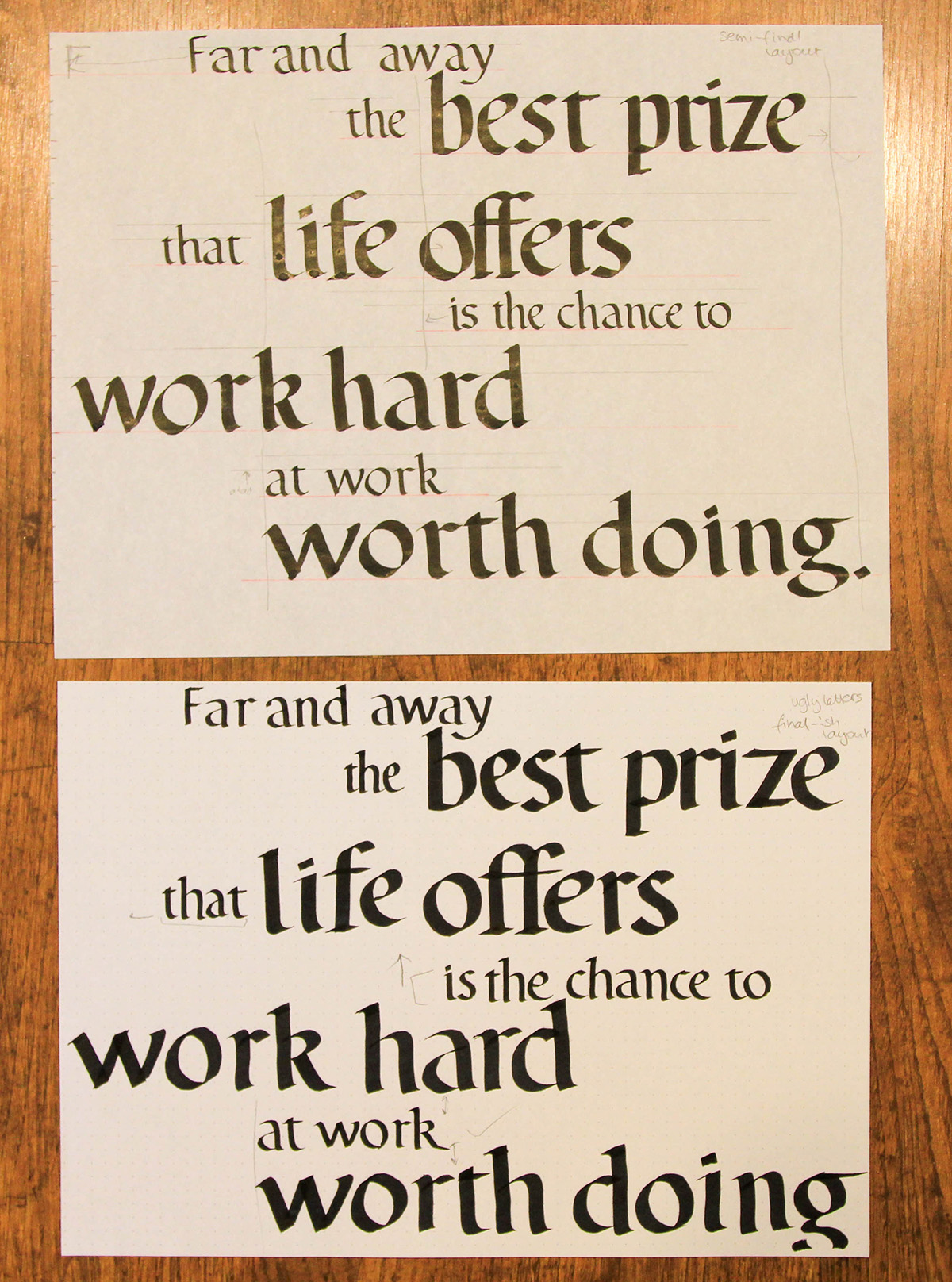 Eventually, I picked a layout that I liked (shown above), and spent another couple weeks shifting things around just a tiny bit. I was starting to feel pretty good about myself — I was growing to like the final version. 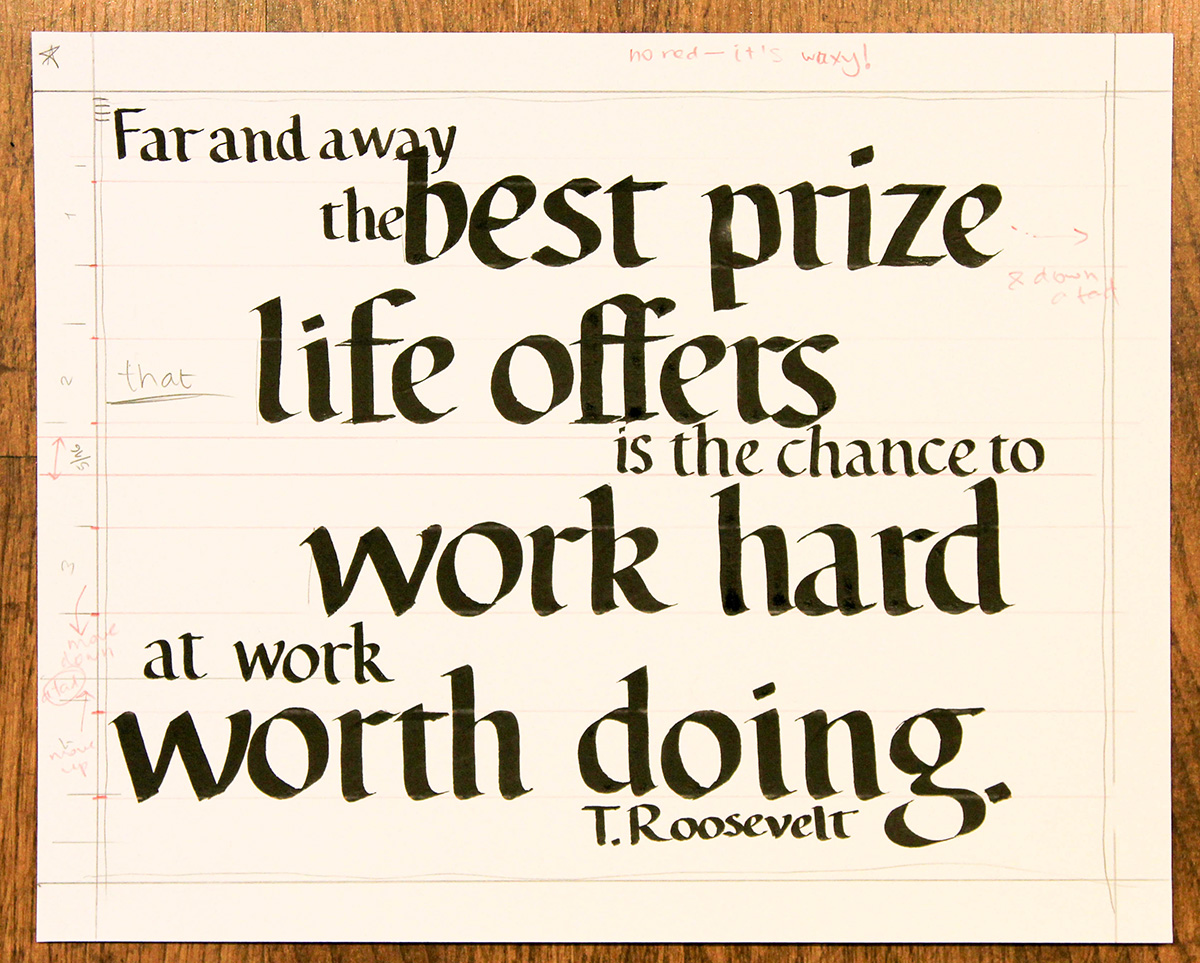 That was, until I realized I had been using a completely wrong size of paper all along. I had bought a nice frame that I wanted to use with the piece, and I should have been doing my layouts for 10 x 8, not 12 x 9 inches. It was about 11 in the morning on a Saturday, and I got pretty upset at myself. I decided I was not starting this over, so I just squeezed everything into the new size.
As you can see in the picture above, it didn't quite fit on the first attempt. I had also discovered that the red mechanical pencil that I had been using to mark things up had wax in it, and ink just rolled off the lines that I made with it (should not have been a surprise, really). 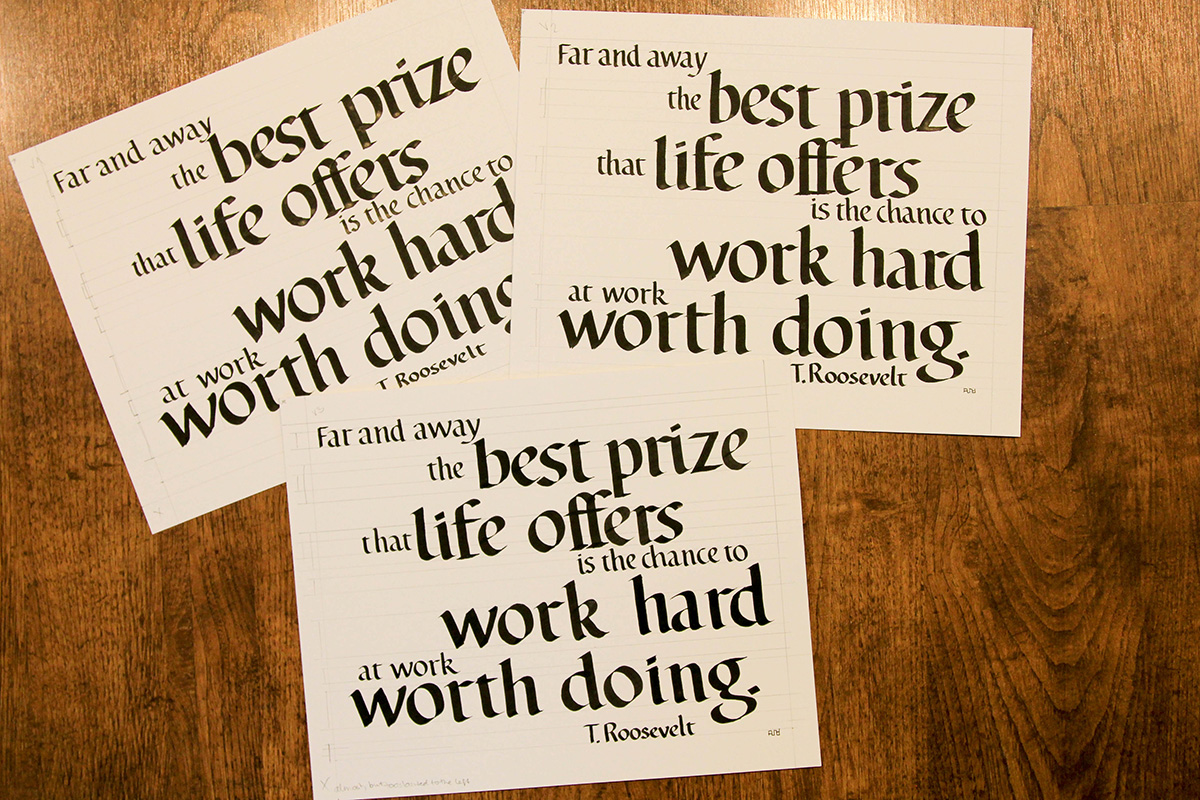 Anyhow, getting upset usually gives me a lot of determination, so I spent the rest of the day cutting paper, pretending this was my final attempt, and trying to do my best at writing.

I ended up rejecting my first three "final" attempts, but the fourth one seemed good enough (at least, it didn't have as many glaring mistakes as the first three), so I framed it and called it a day.

Conclusion? I think I have been overthinking this all along. I had tried too hard to make it perfect, and wasted too much time thinking about this project instead of working on new exciting things. There was even a time when I didn't unpack my pens for several months after moving, since I didn't feel inspired to work.

Looking back, that seems so silly. I would be much better off just finishing this project in 2012 and letting it go. Maybe I would have revisited it by now and made a better version. Maybe not. Regardless, I would have probably made many awesome things that I didn't make.